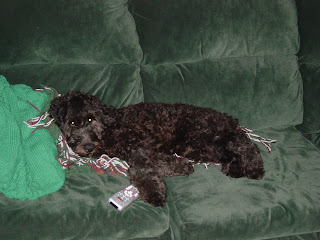 My A and R have been sick lately. I think they might have the flu or something. I feel bad for them. My A came home from work early yesterday. I told him not to even go in but he said he had way too much to do. He was able to come home around 4, we took a nap and I made sure he drank lots of juice. Sometimes I am so good. Santa I hope you got that.

So things have been kind of slow. You know how sometimes when you do things you know you should not but they are funny. Well my A usually lets me outside around 10:30 and then lets me in about 15min later and we go to bed. Usually my A brushes his teeth and stuff while I am outside. Well last night I decided I would not come back in when I was called. I kept running really fast past the door when my A called and would not come in. I kept doing this over and over again and eventually I got my A outside on the front lawn in his boxer shorts at like 11:20pm. Ha it was so funny he was out there just calling me and I would hide in the dark. I am black and hard to see like a ninja. I kept running out of the dark past him. It was so great. Joey was outside too and he was laughing. Although now Joey owes me $5, he thought I could not get A outside in the freezing cold in his boxers. Now I only need $275 to pay back A.

I know I should not have done it but I could not help myself and I made $5. I think I just lost all my points with Santa though. I better start being really good the next couple of weeks. I have about 20 days to get in good with Santa.

I think A was to sick to upload the picture. I hope that A and R get better soon.