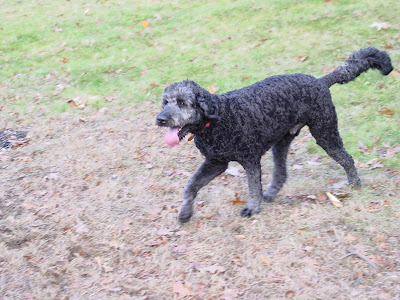 My A is back from Dallas woo hoo. I missed him. It is so nice to have him back.
It was his birthday while he was gone so my R and I have been working on getting him an awesome gift.
Well we succeeded we ended up getting him a Nintendo wii. We needed from help from Drew Http://www.benspark.blogspot.com. Drew actually got a WII and gave it to My R and I so we could give it to my A for his birthday. Huge thanks and lots of tail wags Drew. You are welcome to cover over and play anytime. My R and I had been looking everywhere for a wii and were pretty much resigned to the fact that we were not going to find on in time. Drew however fell on his sword and made the ultimate sacrifice and we were able to get the wii for my A.

The Wii is really cool, it has motion activated controllers. You don’t really have to press the buttons much which makes it much easier for me to play. I can just pick up the controller in my mouth and move my head around. I don’t have opposable thumbs like you people out there, so the motion activated controller is a big plus for me. Now I am just waiting until Lassie’s agility challenge comes out. That game is going to rock. I am also looking forward to Frisbee dog frenzy.

I was happy to help out your A and R.