Stephen the dog: The Envelope Please!! 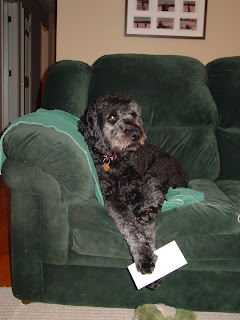 Well the results for the 2006 Stephen awards are in. There were a lot of close races some even came down to the sack money. There really was not a lot of sack money. I figured this would be a much better fund raising event than it worked out to be. I am still $270 short on seatbelt money. Next year I think we are going to have one of those $1000/plate dinners that are so popular.

If you are interested in saving a place for next years Stephen awards send me an email at stephenthedog(at)gmail.com. Please let me know the number of people in your party and if you prefer beef or chicken. Sorry there will be no vegetarian option I eat meat you can eat meat too.

Ok now I am sure you all want to know the winners of the 2006 Stephen awards so here we go.

Best Turkey soup.
This was won easily by Sparky the fish’s K

Best Fudge
Joey’s S the fudge just kept getting better as you got to the bottom of the box. Congratulation to Joey’s S

Best Chili
This one was a tie between Duncan’s A and sparky’s K. This race was very very close and no clear winner could be chosen. The committee was equally split between these two chili titans. I also did not want to pick one or the other as better and risk having, either one of these two great artists give up chili. Feel free to make me chili anytime

Best Dog play move
This one goes to Joey for his full speed head butt from behind the house. It is a great move. Nice job Joey.

Dog of the year
Norman. Norman actually got 100% of the votes thus becoming the 1st ever unanimous Stephen award winner.

While there were many people who came close to winning Stephen awards those names above where the only ones who were able to carry the ¾ majority vote required to receive a Stephen award. I like to point out that Drew was very close to a Stephen award but unfortunately we are not adding the best online journal category till at least next year.

Competition for 2007 Stephen awards starts Friday 1/5 so remember to always do your best out there. I am watching. Perhaps if you work really hard this year you will be able to join the prestigious brotherhood of Stephen award winners.

What, no category for blogs. Stephen, I am dissapointed. I thought for sure that you had a special spot for The BenSpark. Oh well, I must work harder for next year's awards.

Stephen,
It was an honor to be nomitated for a Stephen Award! A first place tie is just too much excitement for me to take! I must go lay down for a bit.
Thank you for the award! :-)

I am honored to receive this award...but I am looking forward to sweeping next year.

I'm not sure who Norman is but he is going down !

Stephen the dog: The Envelope Please!!