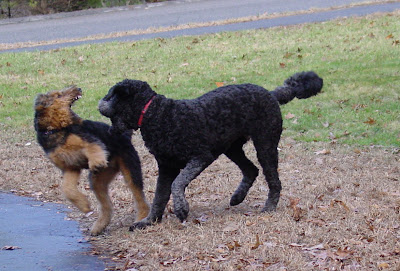 On Sat my R’s friend J came over and brought her new puppy Ginger. This now means my R’s friend J becomes Ginger’s J.
Anyway I got to meet Ginger. She is a 4 month old Airdale which her J got for Christmas. I guess people actually do get puppies for Christmas.
Ginger and I got to take a walk and we played with Fenway. My people even talked to Fenway’s C for a while. She has been on crutches for a while because she broke her ankle. It must stink to be on crutches and get a unicycle and roller blades for Christmas.
I have been telling Fenway that his C needs a good story for how she broke her ankle. I suggested she tell people she was having her brother tow her behind the family minivan on her rollerblades. Everything was fine till she hit the ramp to jump over the Volvo as soon as she cleared the Volvo she misjudged the landing and rode over a sewer grate on the roll out catching a blade. When she stopped to pull the blade out of the grate she kicked the curb out of frustration and broke her ankle. That is the story I would use if I were her.
After playing with Fenway, Ginger and I went back to my house and played some more. We were going to go see Joey but he was not home. Ginger is pretty cool. I did not want to say anything but she has glue on her ears. It looks kind of silly hopefully she will realize it soon and wash it out.