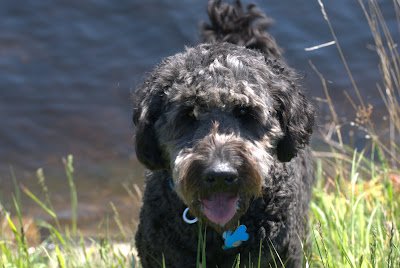 First let me take a minute to introduce myself, my name is Stephen and I am a dog. Yup a dog I walk around on four legs, my lineage is a little bit mixed. You see my mom is a Golden Retriever and my Dad is a black poodle, I know you are thing wow what does that make you Stephen. We some people call me a golden doodle but I prefer to think of myself as a hybrid, I have the refinement to feel at home at West Minster and the street smarts to survive in the big city. As a dog I have some unique challenges and my opinions are often dismissed but let me assure you this does not detour me in anyway, in fact I have been able to achieve many things that people have told me were impossible.

I am not writing to blow my own horn though, I am writing to comment on an experience I had with one of your stores. As with all things in life there are both good and bad sides to this story so lets start with the good. I find it is always best to build a relationship on a positive note and you seem like the kind of man who would appreciate that.

This past July my house was broken into, not my dog house, but my family home where I live with my A and R and now the swaddlepotimous. There was no swaddlepotimous back in July so I am going to leave her out of the rest of this narrative. Anyway as I mentioned my house was broken into, I know what you are thinking “What kind of a dog lets his house get broken into, it is the dogs job to protect the home”. Unfortunately I was at doggie day care that day so the house was unoccupied. Had I been home I am sure I could have prevented the burglary, my R would still have her jewelry and some bad guy would be walking around with a missing arm. Alas I was not at home and the burglars smashed in the basement door.

We have a full walk out basement that my A and R recently finished themselves, in fact they made several trips to home depot for supplies while they were finishing the room. I think it looks very nice and I enjoy lying on the soft carpet down there after a long day of chasing squirrels.

Anyway
So My A picks me up from Daycare, it was a Wednesday I only go to daycare on Wednesdays, and we head home. We come into the house and everything seems normal. Then we go downstairs and the basement door is open and the deadbolt is in pieces. My A seems to think that maybe it was really windy or something, he is not the brightest guy on the planet and a little naïve. Seriously wind is not going to shatter a deadbolt but a sledge hammer sure will. Eventually it dawns on my A that the house has been broken into so now he things well they must not have stolen anything cause the DVD player and TV are still there. Wrong again genius, my R soon discovers her jewelry box has been ransacked a laptop is missing, my A’s watch that was a graduation gift from his parents when he finished at Columbia and a lot of other things are missing. The insurance settlement was over $5000 and that really does not even cover the actual loss.

So we call the police and they show up and take a report. The police leave around 9:15pm. So now we have a smashed in door and need to get it fixed ASAP (this is where home depot comes in) We hope in the car and head over to home Depot in Barkington. Yes even though I am not allowed in your stores I went along for the ride. I like the car and really I don’t want to stay in a house all by myself that has just been broken into, I am brave but not that brave.

We get to home depot and we head over to the doors section. Pete from hardware comes and helps us pick out some deadbolts while we wait for Pete in doors. Both Petes very helpful and knowledgeable, they even waited while we called our friend Rob to measure the old door to see what size we needed. It took until after 10pm for Pete and Pete to get us all setup with everything we needed to replace the door. There was never even a mention of us having to leave as the store closed at 10, they stayed focused and made sure we got all of the necessary stuff and even grabbed someone to ring us up since it was now 15 min after closing time. Pete from hardware and Pete in door are employees you can be proud of. They really helped out.

Unfortunately as I mentioned there is a good and bad side to every story. After we got home my A and his friend Rob installed the door. They had to remove the old door frame and install the new frame since the robbers had shattered the old door frame. Rob is a professional electrician and carpenter so his help was indispensible especially since it was about 2am by the time they had the door installed and the house secured. You don’t find may friends who are willing to stay up all night to help install a door in the rain. (yes to add insult to injury it was raining that night)

Once the door was installed it was discovered that the actual door was warped. This was a steel covered door that came pre-hung in a frame. The top portion of the door is bent in about 3/8 of an inch. Unfortunately the door came shrink wrapped so there way no way to tell ahead of time and it would be a huge pain to pull the door out after installing it.
The door does work but it does not close properly and you can see daylight through the top of the door. My A has tried to add weather stripping but this only sort of works. He is pretty annoyed about it really, I know because he grumbles every time he lets me out the basement door and I like to go outside a lot. Sometimes I ask to go in and out just for the attention.

Obviously Home Depot did not intentionally sell us a warped door but it did happen. My A is too nice of a guy to cause a ruckus or say anything about it but I really feel that Home Depot at least owes him an apology. You company came so close to providing a great experience, my A still talks about how great Pete and Pete were but as time goes by I hear less about Pete and Pete and more about the damn door. I was wondering if you could provide my A with an apology for selling him a warped door, I would really appreciate it and I think it would go a long way towards keeping him as a home depot customer.

I know my A has a few upcoming projects, he still need to build me a dog house and after pricing security systems he is talking about building a moat around the house. His theory is, if you are looking for a house to break into you probably keeping going past the house with the moat. I tend to agree if someone is crazy enough to build a moat do you really want to find out what other surprises they might have?


P.S. Would it be possible to get an autographed photo?

I'm glad you acknowledged the positive experience you had. I too have had some good experiences at Home Depot.

Unfortunately, I've had enough bad experiences at the Avon, MA store that I haven't returned in a couple of years although it is most convenient to my house.

Maybe you could tell your A that the door provides potentially life-saving ventilation.