Stephen the dog: Steve Runner I can help you

Steve Runner I can help you 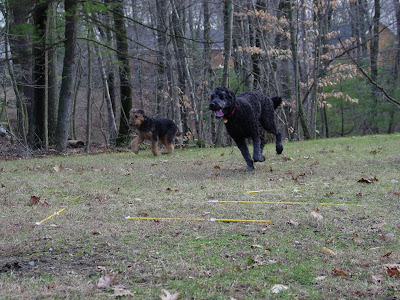 My name is Stephen TheDog. It is nice to see that we both have usefully descriptive last names. You are a runner and I am a dog so it all makes sense.

I have been listening to your pod cast and reading your website lately, I don't have a job so I have a lot of free time. I see that you are trying to run a 4 hour marathon and I think I can help you. I run a lot mostly around the house but hey running is running right?

The first thing I noticed is that you are trying to run on only 2 legs. Look at all the animals out there we all run on 4 legs in a crouched position not that silly upright one you humans try to use. The only successful animal to run on two legs is the Ostrich and those guys are just weirdos what with the backward hinged legs and all. I urge you to give up on running upright and use all 4 legs. The transition from 2 to 4 legs should save you at least and hour over the course of a marathon. I would like to say it would be twice as fast, since 4 is twice as good as two but you are a human and you guys are not all that coordinated, even still I think it will save you an hour off your best time.

Next I see that you like to talk while you run this is good. You want to keep your tongue exposed to that air as much as possible it will help cool you off. When you are not talking you might want to leave your tongue hanging out so that you are constantly cooling yourself off. Trust me it works.

Clothing I see that you are running with a lot of high tech clothes on. I know you need something to hang that number on. I would recommend a simple collar. You spend a ton of time thinking about if you are dressed properly so I say just don't dress throw on a collar and run in your fur. That way you don't have to think about if your space age polymer bend wicking too fast or if your breathable fabric hyperventilating.

You are also going to want to add a tail. When I run I use my tail not only to balance but to store energy. I can use the tail to allow me to keep my center of gravity balanced even while only my right or left side has contact with the ground. This is very important as it allows me to go much faster with less effort since I am always balanced. I definitely recommend you get a tail and start using it on your training runs right away. It will take about a week to get used to it but once you do you will shave minutes off your times.

Steve I believe in you I think you can do it. You just need to think outside the box. Sure people might laugh at you for running on all fours with only a collar and a prosthetic tail. Probably not too much more that they laugh at you now for your goofy little pod cast. Just kidding we are laughing with you. Once you break 4 hours though no one will be laughing.

Hey its funny you have this 4 hour barrier, Roger Banniser had the 4min Barrier and Chuck Yeager had the sound barrier. The key to remember is that all barriers are eventually broken. You will probably not be knighted for running a 4 hour marathon but in your own little world the accomplishment will be just as great because it was something you had to work for.

Keep up the good work. I am going to send you a tape to listen to while you are running. I have been able to motivate the mailman to drop his sprint time from my front door to the street by over 3 seconds and I am sure I can produce the same kind of results for you.

Between the above changes and the motivational tape I will be sending you I am sure you will crack 4 hours in your next marathon.

You should have the tape in a week or so it is going to take me a while to record 4 hours of highly motivational barking.

Thank you so much fot the kind words and wonderful advice. I really appreciate the fact that someone from your species would take the time to compose such an articulate and helpful message, especially in light of the fact that you: as a dog, and I: as a runner, are so at odds with each other during a typical day.

You see; traditionally speaking, your species has been known to chase me as I am out running. Were it not for the offensive growling, and baring of canine teeth, I would be most happy to run along happily with your kind, however I fear that there is some kind of offensive conflict that dogs, such as yourself, find with runners, such as myself.

As that is the case, you can understand how I might be somewhat cautious at your attempts to help me achieve a four hour marathon. I find it somewhat suspicious that you would recommend that I wear a dog collar, grow (or wear) a tail, and run with my tongue hanging out of my mouth. If I didn't know any better, I might think you were attempting to slow me down, to make me easier to catch.

So, thank you for your help Stephen. I appreciate your good intentions, but I hope you'll understand if I chose to continue with my current training schedule and technique as I seek to improve my speed, and achieve a four hour finish in a marathon.

I understand that you may feel that our respective kinds are at odds with each other. As you probably well know there are some bad apples out there. Your kind has Timothy McVeigh, Jack the Ripper, Rosie O’Donnell and skinheads. We dogs have Kujo and pit bulls but that is about it. I feel the human race has far more bad apples that we dogs have.

I feel you are often misinterpreting our behavior. Yes we do chase you but we are only trying to motivate you. Watch the tour de France sometime fans are always running along side the cyclists. As for the growling it is just our way of saying “go Steve go”. Steve is a rather hard name say for us dogs and often it comes out as a growl. Finally the baring of canine teeth is just us laughing at you, you have to admit you look pretty silly when you run. Humans bear their teeth all the time and call it smiling. We don’t get put off by you baring your teeth at us so why does it bother you when we reciprocate?

Steve it is in our nature to run fast and be able to take down large game. That is how we evolved. We did not need to discover fire or invent guns. We adapted our bodies to the point where we can run down an elk and kill it in a matter of seconds. Please don’t believe for one min that if our intentions were anything other than to say hi and support you that you would still alive. I certainly do not mean to threaten you but just want to point out that you are running 10min miles and have no teeth or claws. I can run about a 3min mile and have both teeth and claws. So I don’t see how you could think any of my kind wishes you ill will.


That being said I understand you reluctance to take my advice. When did you get so jaded? Did you work for an Internet start up only the President and CIO get rich while your tens of thousands of stock options were rendered worthless? You don’t run much faster than 9min miles even when training. The though of my plotting to make you easier to catch is ludicrous.

I will leave you with this one though. Innovation in sport is rare. Often those who innovate are originally laughed. What would have happened if Dick Fosbury were close minded. Steve I thought you were ready but I guess you are not.

Steve I have no vested interest in this. Go with god and run your races. You will probably break 4 hours someday. I wish you the best of luck.

P.S. that for selecting me as you featured blog of the week

Dear Stephen. It was only when I logged on to Steve Runner's site tonight that I realised I had made a terrible mistake. I logged on to something called Stevethedog.com thinking it was you. I thought it was a bit weird because the last post was in October 2005. Are you aware that you a a forerunner? Is there a connection between Steve The Dog and Stephen the Dog? I left a comment anyway, as Steve Runner had mentioned it. Any, Stephen, greetings and all that stuff from Scotland. Lots of lovely Sheep Dogs here. Lots of them are of the female persuasion. You'd have a ball, man. Gordon

Do you have any picture of the sheepdogs you could send over. Scotland sounds lovely I would like to visit.

Stephen the dog: Steve Runner I can help you