Stephen the Dog declares for 2008 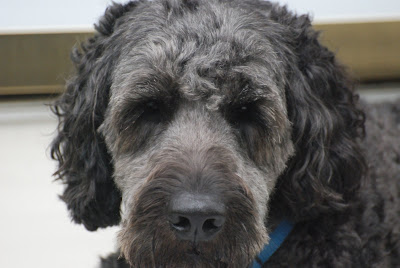 This weekend we went to my R’s parent’s house. Apparently it is a very nice house or so I am told. I don’t really know since I get to sleep in the garage and am only allowed in one room off the garage. Let me tell you there are some major drawbacks to sleeping a garage. I know jimmy254 things it is cool that he lives in his parents garage but let me tell you it kind of stinks. It is drafty out there and the cars smell a little funny. Plus you have that refrigerator noise to lull you to sleep. I don’t want to complain though. I did get a sweet bone and got to do some swimming.

As you probably have noticed I only update here on average about once a week. I know I should be more diligent but I have so many things going on it is hard to write sometimes. I still have not had my interview for that financial service job. I am going to need to follow with Mr. Noland soon I bet his is just busy reviewing resumes. I am so glad he was able to see my potential though.

I also have had a huge craving for Pringles brand potato crisps lately. I am not really sure why. Do you know why they call them crisps and not chips? It is because they can’t legally call them chips because well they are not chips. Pringles are actually made from a potato paste. That is the only way they can get them all in that weird little shape.

Ok so now that you are up to speed.

On a far more serious note

With the upcoming elections in November I am considering starting an internet campaign. I know there is a long way to go before you can make up you mind on who to vote for and I respect you decision either way. However as of today I am declaring my candidacy. That is right I am running for office. You may ask which office well I am running for all offices. That is right I want your throw away votes. I know how it is, in every election there is a race you don’t care about, don’t have enough info to vote, or don’t like either candidate. Rather than just filling in a circle please take a min and write in Stephen TheDog. Don’t worry I can’t win as the laws will not allow a dog to take office. (that is a fight for another time) However if I can get my name on enough ballots perhaps we can show those people in Washington what a dog with a lot of free time can do.

Politicians often have this air of entitlement. Imagine the message you would send by voting for me. Sure you could write in Elvis or Gilligan but if as a nation we all wrote in Stephen TheDog. That would send a powerful message. Well Mr. Freedman you did win but there was a write in candidate who got 20% of the votes and he’s a dog. Nice job campaigning pal!

Please vote for what you believe in but if you don’t care I say vote for the dog. Show the government that you voters really have a choice. Rally behind the dog!

Stephen the dog for a better America. I bet if I was a Senator I would not have to sleep in the garage.

Woof, I go running with Two Dogs and I want you to know that I would vote for you. Milk bones for all voters

Thanks for the endorsement I really appreciate it. I hope to at least make some noise this November.