Stephen the dog: Who should I vote for Stephen TheDog '08 Press Release

Who should I vote for Stephen TheDog '08 Press Release 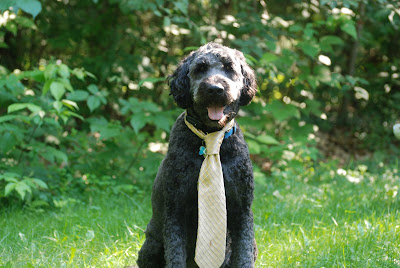 Barkington DE. – Stephen TheDog a 3 ½ year old Poodle Golden retriever cross and author of the award winning blog StephentheDog (http://www.stephenthedog.com/) has officially announced his participation in the fall election season.
Stephen’s candidacy is unique in many ways, the least of which is that he is a dog and thus technically unqualified to hold any political office. While this would be a detriment to most campaigns Stephen is actually using it to his advantage.
“I see that fact that I can not actually hold an office as a positive. I am not actually trying to win but I am trying to bring awareness to people about how they vote. Too often people make uninformed voting decisions and just fill in a bubble with out a good reason to vote for that person. I suggest that if you don’t have an opinion vote for me. I can’t win and if enough people write in Stephen TheDog it will send a clear signal to the candidates that they need to do a better job campaigning.”
There have been write in campaigns before but never has there been a write in campaign where the candidate has run for every office with the understanding that he can not win any of them. “This is not about me this it about sending a message. There are a lot of unrepresented people out there who want to be involved in the democratic process but don’t have a candidate they can stand behind. A write in Vote for Stephen TheDog not only prevents the noncommittal vote but also will show the candidates that there is a large untapped portion of the public who they have not swayed. “
The main advantage for the write in candidate is that Stephen can be involved in every race at once. Since Stephen TheDog is not running for any office in particular, if for example a person knows who they want to vote for President but has no opinion on the town clerk race they can write in Stephen TheDog for town clerk. Alternately if they have an opinion on Town clerk but can’t decide between Obama and McCain they could write in Stephen TheDog for President. It also works well for uncontested races. Who really wants to vote for the candidate running uncontested did he really win your vote? “Show them they have not won your vote and vote for the dog”
In every election you get write in votes for Elvis, Gilligan, my neighbor Jimmy etc. These votes just get ignored because they represent a tiny portion of the total votes cast. However if , all of these throw away votes were added together it would represent a large number of votes. “My goal it to unite the throw away votes and show the power of the people”
“We must send a message and take back the election process”

Stephen the dog: Who should I vote for Stephen TheDog '08 Press Release