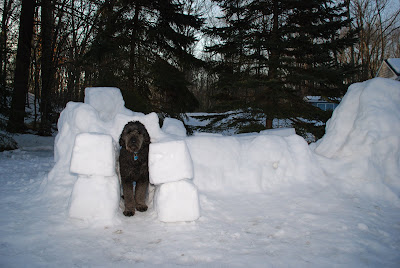 Lately I have been spending a lot of time on my Financial Friday posts. I spend tons of time watching the market and researching trying to figure out what to buy and when. Fortunately to this point I have been very successful. However Financial Fridays is only a part of my ODD. I instituted them to try and make my self update more and to track my performance as I enter the world of day trading.

Luckily for me I entered the market at a time of turmoil. This works well for me since there is so much flux that what may seem like a mistake on minute often turns into a move that looks like genius a day or two later.

Anyway today I am not going to talk about money. Nope This weekend my A and I built a snow fort. It actually started off as a snow tower. We were going to see how big of a snow tower we could actually make before it collapsed on it self. Conditions were really good and we got off to a great start. After about an hour of building we had were up to about 3 feet when our neighbors L and C came over.

L has been working with my A and I all winter building snow forts and is quite dedicated. In fact L has previously worked on snow fort 1.0 and 1.5. He is a great worker and has some great ideas. On Sunday his idea was to climb to the top of the tower and jump off. Apparently this is a good way to prove your tower is strong enough to hold a 60lb child. My A eventually decided that we should just turn the tower into one a corner of a fort. I am very proud of him. He made and adult decision and decided as fun as it would be to watch L jump off a 15ft snow tower that was probably not the best idea. It might also have something to do with the fact that L’s dad Mr. X is a lawyer and L and C informed us they had to stay in the front yard where their dad could see them.

I don’t what Mr. X thinks we have in our back yard but there is nothing scary back there. Really there is a bird feeder, some lawn furniture and that is about it. We keep this kid chipper in the basement behind the oil tank.

As we were working on the fort C decided to build a path from the driveway to the fort. This was a great idea since we needed a way to provision the fort. What good is a giant snow fort with out provisions? You don’t want to be stuck in your fort during a snow siege and have no provisions. If History can teach us anythingit is to properly provision you forts.

As the fort continued to grow more and more children from the neighborhood came over to help build the snow fort. We ended up with everyone on the street except Joey and his people being involved in the building. This makes things a little more complex since the rules of snow forts clearly state you can not attack anyone who was involved in the snow fort building. It is rough when you have a giant snow fort to project power into the neighborhood but no one to attack from the snowfort.

Fortunately my neighborhood has a build in villain in Mr. Mailbox. I still don’t get that guy. What is he getting in the mail that he needs this ridiculous mailbox for and why is he afraid of dogs. He is even afraid of Bailey the Bichon Frise. Being afraid of Bailey is like being afraid of a feather pillow. I don’ think there is anything less threatening than Bailey she looks like a fluffy cloud with a face.

As soon as the snow melts I am going to start walking on the grass in front of Mr. Mailboxe’s house. My A keeps saying it is not worth the effort and we should just walk in the street but we pay our taxes. We pay a lot of taxes and really use few town services so I am gonna walk on that grass. In fact from now on I am going to make it a point to pee on the grass in from of Mr. Mailboxes house. Why because I can. When your freedom is threatened you need to stand up and by god I am going to standup. In fact I am going to go one step further and raise my leg for freedom.