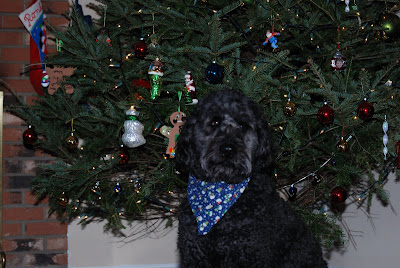 My name is Stephen I am a 3 year old golden retrieve poodle cross. Yup I am a dog a very cute one in fact. I am pretty awesome in fact if I were looking to get a dog I would get me.

Anyway as a dog I don’t fly much, there is something about being treated like baggage that turns me off to flying. It is really not fair that those little dogs get to ride in crates under the seats. Would I be able to fly if I sat in a seat? I sit in the front seat of my A’s (that is the guy that feeds me and takes me places) truck all the time so I am sure I could handle an airline seat no problem. So what do you think if I buy a ticket can I ride up top with all the people instead of in the baggage hold? I know it will cost more but money is not really an object I will just put it on my A’s Amex.

I have a question when you let cats fly on planes, what do you do if someone on the plane is allergic to cats. It does not seem fair to me that you let cat fly in the cabin without asking all the other people on the plane if they are allergic. I imagine nasal allergies at 30k feet are not fun. I think all the passengers should get to vote whether or not they want a cat in the main cabin and that cat would have to win unanimously. It is not fair to torture someone with cat allergies for hours without their consent. It is hard enough to sit in those little seats for hours never mind if you have to deal with cat allergies. Of course I would have no issue sitting in that nice comfortable seat for hours or days on end. In my case the seat is a huge upgrade over riding in the dark next to some army guy’s stinky duffle bag.

I digress while I am certainly interested in whether or not I would be allowed to fly in the main cabin if I had a seat and your cat policies that is not the reason for this letter. I know you are thinking oh no here it comes. This is the part when you tell us how bad your flight experience was or what we have done to wrong you our beloved customer. I understand that is what you are thinking especially since the last 20 letter you read probably were to that effect. Fear not this letter is different and not simply because it was written by a dog. No this letter is positive! Yes I know, wow a positive letter but really stick with me it is positive. Really American Airlines is getting a positive letter from a dog. Mark this day on your calendar in fact take a min look up from your desk and smile as I am sure it is not everyday you get to a read complementary letter from a dog and a golden doodle no less.

As you know Christmas was a few weeks ago. I am sure you probably don’t know that my A and R decided to take a vacation to St Croix without me. Yeah that is right they left me, I am still a little miffed but I have my A’s AMEX and spare time so I am sure he will make it up to me.

Well my A and R were scheduled to come back from St Croix on 20th. Well on Dec 20th it snowed in the North East, in fact I snowed a lot flights were cancelled airports closed etc. I know because I was here and not in St Croix. My A and R managed to get to Puerto Rico from St Croix but their flight home was seriously delayed. This was not good as I really wanted my A and R home, sure I was mad at them for leaving me but I also missed them. It really looked like they were going to get stuck in Puerto Rico because of all the cancelled flights. I am sure you remember, in fact I bet you still have complaint letter from that day rolling in. My A told me he saw a ton of really unhappy people at the airport.

Obviously weather makes the airlines job a lot harder. Being stuck in Puerto Rico my A decided to go and talk to your customer service people and see how long the delay was going to be. My A ended up speaking to Carmen Alvarez, remember that name I have a feeling she is going places. Anyway Carmen said the flight was going to be delayed more than the 4 hours showing on the boards and that if he came back in ½ hour she would be able to provide him with more details.

After 30min my A and R went back to ask Carmen what was going on. Carmen calmly explained that their flight was severely delayed and the plane was still on the ground in Barkington with a schedule de-icing in 2 hours. This was not good my A and R were going to be stuck in Puerto Rico. Oh no they are going to miss Christmas. I know Santa finds people when they are away but unfortunately I think dogs are not Santa’s top priority, we tend to eat the cookies that get left out for him.

Well you know what Carmen Alvarez managed to get my A and R on a flight to Miami and then to Barkington. Would you believe it they get in only 4 hours late and their baggage even makes it. My A has been raving about what a great job Carmen did for days now.

I just want to say thanks to American Airlines and especially Carmen Alvarez in Puerto Rico for pulling off a Christmas miracle and bring my A and R home close to on time. Even though they were late they managed to get home in time for Santa to come and drop off all my Christmas loot. I was really good this year. Please pass on my sincere thanks to Carmen. Carmen was able to take care of my A and R when I was not there for them and I really appreciate it.


Thanks again. When flying I know I have a choice and as long as Carmen Alvarez works for American Airlines I will choose to fly American.

Stephen I'm glad you took the time to thank Carmen for getting your A & R home. I'm sure they're glad to be back home enjoying some proper winter weather.