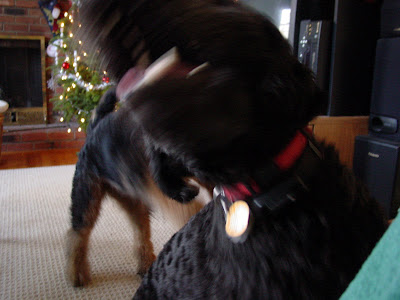 Last night my A finally got his MRI done. This was his 3rd try the 1st two he had some issues with claustrophobia. Someday I think they will sand the claw marks out of the tube.

I am sure it was not easy for my A. I don’t think it would be super hard. I run through tunnels all the time in agility class. I really love the tunnel. I even let my A borrow my agility tunnel to practice for his MRI.


I had him lie on his back in my agility tunnel then I ran all around it barking. I tried to be as annoying as possible. I can be pretty annoying when I try. I wanted to make sure my tunnel was way worse than the MRI tunnel. I think I did a good job because my A got through it. He seems to think the 2 mg of Ativant were what did it. I think it was my MRI simulation, it is kind of tough to tell though when he came home he was talking to the chair. How silly is that the chair is not going to talk back. I’m a dog and even I know chairs don’t talk. He also kept bumping into stuff, I tried to help by herding him through the house I was doing great until I knocked him over. When he was on the ground I could not resist and just kept licking his head. I don’t know why I like that but I do.

I hope your A is okay, well wishes from us.