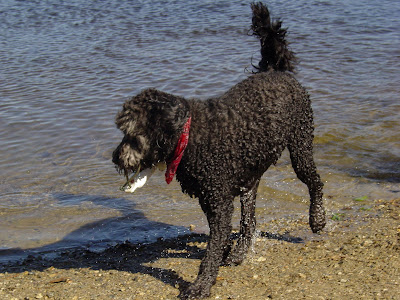 The other night I was sitting outside like usual just minding my own business. All of a sudden a heard a noise and some people came walking into my yard. They were being all sneaky and weird. This kind of disturbed me but then they threw me a treat so I figured what do I care, I got food. I am easily bought. Don’t get me wrong, I was still ready to rip their throat out if I had to but they seemed harmless.

I was a little worried there was a bomb in the package. I did not think it was a bomb but I am not trained to sniff out bombs so I could not be 100% sure. As the people were running away I was able to see their faces, I realized they were no threat and it was not a bomb. My A came to the door, looked around, and found the package.

It turns out this was some kind of neighborhood game. We had just been ghosted. The package was full of treats; most of them were for me. Man I love treats! I would like to say thanks to those people who ghosted me. Yes, I know, who you are remember I was outside. I would recommend maybe some duct tape over the LEDs on your sneakers next time.

My A has been trying to get me to tell him who Ghosted us, but I won’t do it. That is not fair. My A and I went out the next day and we ghosted two other people like we were supposed to.

Well, Halloween is coming; I hope my A lets me go trick or treating. I am going to get so many treats. I hope all my neighbors are loading up on treats and in case you are wondering am partial to milk bones.