Stephen the dog: Response to Ted Murphy and Bonzo

Response to Ted Murphy and Bonzo 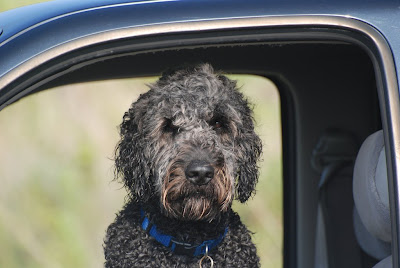 Thanks for the response sorry it has taken me so long to get back to you. I have been on vacation. Three weeks ago my A and R threw me in the back of the truck and 13 hours later I was in Cape Hatteras. It was a really fun trip I got to play in the ocean and made some new friends.

The trip down was a little tough. 23 hours in the back seat of an extra cab pickup truck is not really my idea of fun. I tried to sleep as much as I could but between the stupid audio book my A and R were listening to and the thought of crashing it was a little rough. Can you believe there was not even a dog in the whole audio book.

At one point on the trip we went over the Chesapeake Bay Tunnel Bridge. As we were going over the bridge I sat up and started staring out the windows. My A though I was enthralled by the view of water on all sides. Unfortunately I was scared to death, my A is not really that good a driver, and I figured if I was going to plummet over the side of the bridge and into the water I wanted as much warning as I could get. Thankfully we made it across without incident.

Send me you address and I will send down an autographed photo of myself for the postie wall of fame. I have never been on a wall of fame before. Do I get a plaque? My picture is hanging up at day care but I don’t think it is the same.

If you could send me an autographed photo of Ted and yourself, that would be awesome. I am trying to build up my credibility as I continue to looks for jobs that will hire dogs. The autographed photos go a long way towards establishing my credibility. It is sad but we dogs are very discriminated against in the work place which is why I have such respect for Ted. Ted has never limited my earning potential because I am a dog. The man gave me an opportunity and I am just trying to make the most of it. Thanks Ted you are definitely not the most Evil guy in the room.

As far as SB^3 goes both you and Ted are definitely invited. The date is still being worked on but I am thinking the end of July. I see that news of SB^3 has not reached Florida. Well SB^3 (Stephen’s Blowout Birthday Bash) is my annual birthday party. I was really born in April but my A says it is too cold in April to have a ton of dogs in the house. Last year was awesome we had like 30 people and 6 dogs. This year is going to be even better I am working on getting on of those inflatable jumpies and maybe a slushie machine. It will definitely be a good time you should come if you can make it. I will even get a cake for Ted to plow.

I still don’t understand the cake plow however as a business dog I have an idea. Obviously Ted likes to do these cake plow things and they make quite a mess and are difficult to clean up after. I am sure it is not fun to run around with Cake on your face for too long. I would be willing to help people clean their faces after cake plows. For $10/face I will lick all the cake off person’s face as well as make sure that none of their hair sticks up. I have been making sure my A’s hair does not stick up for a couple years now and he has never gone to work with his hair sticking up. Sure he is almost bald but that is not my fault.

Hope you can attend SB^3 and please consider me for you all you post cake plow face cleaning needs.

P.S. Please don’t forget to send me the autographed photo

Stephen the dog: Response to Ted Murphy and Bonzo