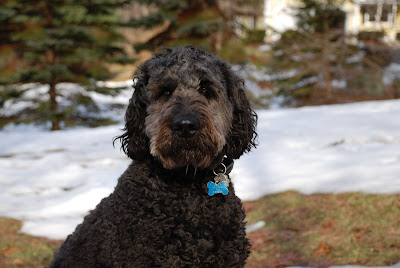 My name is Stephen and I am a 3 year old Poodle Golden retriever cross. I am a dog and as a dog I have some concerns about the Dog Policy in the Eastern Mass National Wildlife Refuge Complex.

First let me start by telling you a little about myself. I am a very nice dog, I don’t chase animals unless you count Salem the neighborhood cat she calls me names so that doesn’t count, right? . I am a certified canine good citizen. I have taken multiple obedience classes and everyone says I am very well behaved.

I would like to come and visit the wildlife refuge. I would be willing to stay on my leash and even wear a prong collar the whole time I am there. I will even put on my prong collar and leash before we drive into your parking lot.

I have read you Dog Policy dated July 1, 2005 which prohibits dogs from the refuge. However I promise I will
• Not compromise public safety
• Not Have any conflicts with out refuge visitors
• Not pose a threat of harassment, disturbance and harm to wildlife

I understand that you want to protect the wildlife in the refuge. However the primary purpose of the refuge is nature walks, wildlife observation, photography, fishing and hunting. Doesn’t hunting pose a significant threat of harassment, disturbance of harm to wildlife? I am just saying if I was say a deer I would be more disturbed by bullets whipping past my ear than a well behaved dog walking on a path.

I am aware that wildlife can not tell the difference between a leashed dog and a non leashed dog. This is probably good since wildlife are by definition wild. They should stay clear of both humans and dogs. Thus a default assumption of all dogs are not on leash makes sense for wildlife. The argument makes no sense if a dog attached to a human should it be of less of a concern to a fox? I believe you humans kill far more things than we dogs do. I would say a leashed dog is far more dangerous because it come with a human. A human without a dog would seem to me to be far more dangerous at least you know a human with a dog likes animals.

You policy also stated a concern for Dog feces. I will happily have my A pick up my poop he does this anyway. Why do deer get to poop where they want but when a dog does it people complain? The refuge suggests people wear boots because the trails are muddy is dog poop really that much worse than mud? I realized there are some irresponsible owners out there however mine are very responsible. I see the poop argument as a non issue. I have my pooped picked up. I even have a bumper sticker for my truck that says “I make my owner pick up my poop”

I would really love to visit. I understand you are going to say no and that is ok. However please consider this one thought. Which has a larger impact on the environment and wildlife a dog or a man? All those people walking around mess up nature far worse than I would. I guarantee I am not going to leave twinkie wrappers or beer bottles in the woods. Next thing you know they will be blaming global warming on us dogs.

You policy is obviously the response to bad dog owners but why take it out on the dogs we always get the short end of the stick. Just ask any English Bull Terrier what bad owners can do.

I wish you would reconsider your dog policy. I would be happy to help in anyway I can. I am attaching a photograph of myself so you can get a feel for how ferocious I am.

Do you allow cats in the wildlife refuge.? I don’t see a cat policy. If I dress up like a cat can I come in and take a walk? What about rabbits do you have a rabbit policy? Why are you singling dogs out? I bet you at 24-45% of the rabbit owners out there do not keep their rabbits on leashes.

Thanks for you time. I look forward to hearing from you.


P.S. would it be possible to at least get an autographed photo or a postcard from the refuge

I laughed out loud twice during this read, so funny, and then you ask for autographs and pictures, too funny Stephen.

Glad you were aumused. When will people learn to treat us dogs as equals

You scare me Stephen. Very scary.