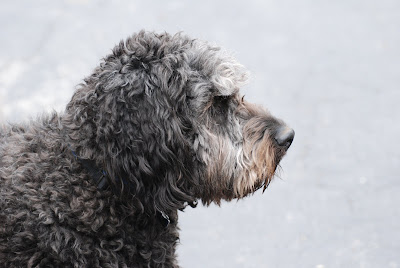 Stephen the Dog has won. That is right I went up against the forces of evil and I won. I am of course referring to the San Disk rebate offer. After about 20 hours of mindless hold music someone finally answered. There were able to look into my rebate submission and it appeared to be fine.

There was no explanation as to why it was originally rejected. Hmm maybe you did not realize you were up against a dog with free time. Score one for the good guys. Now I have to figure out what to spend my rebate on. I am thinking I should get a pet bunny to chase around the house.

It has been a pretty quiet week so far. Tomorrow I get a hair cut. I think I am going to ask for a big S shaved in my chest. That would be so cool. I don’t know if my A will go for it he is kind of conservative. I think it would looks awesome though. Maybe I can sell advertising space on my body. I do walk a lot and the goth dating ad revenue has kind of dried up.

If you would like to have a message shaved into my fur send me an email. For $300/side I will wear your message till it grows out. Please no obscenities, and no Dr. Phil I am not going to advertise for useless hour you call a show. Putting people on TV and giving pop psychology answers to serious issues is like giving a lollipop to a kid with a cavity. Sure it might distract them for a bit but in the long run it makes the problem worse.

Hey does anyone know what Dr. Phil’s 1st name is? I bet it is something weird like Chris. Dr. Chris Phil. Silly I guess maybe it is Phil but only an idiot would use the title of Doctor with their first name. You are, either being informal, and using a first name which would mean no titles or you are being formal and should use the title last name format.

I certainly don’t got but GDE Stephen.